by Tim Nichols | How to Apply 3MP Strategies

Try this experiment with me. Fill a 16-ounce glass with the following ingredients: 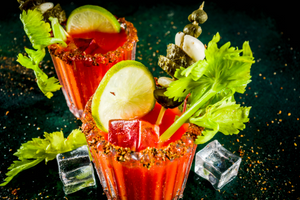 Now, if you were to pour those ingredients into a mixing bowl and attempt to separate them from one another, you can’t. In fact, the more that you touch the concoction, the more that the ingredients will intermix. If you were to taste this mixture, the taste will be relative to how much of each ingredient you placed into the glass. Too much of one ingredient or the other would make this an incredibly bitter, salty, or spicy drink. Whereas, the correct amount of each ingredient would produce a savory start to a popular drink that is loved by millions.

To someone who may have experienced hardships in their life that have made them bitter, salty, or maybe even spicy, they may feel guarded in their networking conversations for fear that the flavoring of their past will reveal itself in a way that is offputting to those with whom they’re speaking.

Let me offer an idea that you can use in your conversations that will utilize those savory ingredients from your past to make you unforgettable and will quickly become an anchor of trust in your new relationships. I introduce to you the “Vulnerability Loop”.

A vulnerability loop is a psychological device that may be dropped into a conversation that creates authenticity, breaks down barriers, and quickly builds trust. It is used to create a shared exchange of openness. A rather discreet tool, it seems harmless to the listener and sounds like a normal conversation to anyone who may be near.

If our “Looper” wants to break through the typical rehearsed conversational volleys about business and wants to quickly learn if this “Listener” is someone with whom they’d like to pursue as a client or referral relationship, they would drop in a vulnerability loop before they began to ask deeper questions. The idea is to create a safe space of trust with the Listener so that they will feel comfortable to provide more in-depth responses to the questions that the Looper is about to ask.

Here’s how it works:

✅  LOOPER:    The Looper will share a vulnerable pre-story about a time when they had an experience with the topic they’re about to ask the Listener. The Listener will typically respond to the rhythm, flow, and depth to which the Looper is willing to go with their pre-story. Engaging the Law of Reciprocity, the pre-story primes the Listener to mirror the vulnerability of the Looper throughout the next series of questions. The Looper then asks a broad question that offers the Listener to give an easy response.

🎯 LISTENER:    Provides a general response to the broad question that introduces the idea of the topic.

✅  LOOPER:    Asks a slightly more focused question about the topic.

🎯 LISTENER:    Provides a slightly more focused answer to the question.

✅  LOOPER:    Continues the vulnerability loop by narrowing the focus of the questions.

🎯 LISTENER:    Continues responding to the vulnerability loop by narrowing the focus of responses to the questions asked by the Looper.

*This loop will typically continue to the depth at which the Looper stopped being vulnerable in their pre-story. Regardless of the outcome, both the Looper and the Listener feel a deeper sense of trust in one another that was created by the reciprocated shared vulnerability.

Here’s an example of a scenario where the Vulnerability Loop was leveraged in a 15-minute conversation. Through this brief dialogue, so much trust was created between the Listener and the Looper that the Listener began to divulge their legal history, even though that was not the intention to gain that information.

This conversation happened over the course of 15 minutes in the hallway of an office building. The young man (Listener) with whom the Looper was speaking was an engineer at an engineering firm in the building. As they spoke, the Looper learned that he was not a U.S. citizen, but had been living in the U.S. since he was 8 years old. When asked from where his family had moved, the Listener said that they had come from Zacatecas, Mexico. This is where the Vulnerability Loop is applied.

✅  LOOPER:    Zacatecas! I know people from Zacatecas! I used to work with a guy who was from there. Let me ask you this. When my friend was 19 years old, he inherited a 200- acre banana plantation from his grandfather in Zacatecas. He moved back to Zacatecas to run it. But, he moved back to Texas within 12 months of moving to Zacatecas. Why would he give up his inheritance and leave?

🎯 LISTENER:    No. It’s the gangs. If you own a business or a farm, they will come and take 50% of your earnings every week. So, my family snuck out of town and ran to the United States.

🎯 LISTENER:    No one in my family had an education. I needed to get a professional career that would pay me well enough to help my family and that couldn’t be affected too much by the economy. So, my parents worked really hard to pay for me to study engineering at Texas A&M University. I know that I owe them so much. Now, I’m concerned because I have to go to court about being wrongfully accused of a DUI (Driving Under the Influence) because I hit a parked car while looking down at my phone. That could affect my engineering career. But, my attorney believes that it could be easily dismissed.

Listen to the depth of trust being applied to the Looper having only shared a brief Vulnerability Loop. This conversation paints a very elaborate picture of the past, present, and future of this Listener. The Looper only shared a vulnerable story and asked a simple question. From there, the Looper listened to the responses and asked 2 more broad questions.

Psychologically, the Listener heard in the Looper’s story: heritage, hope, crime, and expectation. So, that’s what he mirrored in his storied response. In turn, the Listener feels emotionally endeared to the Looper for caring enough to ask questions about his family heritage, his career hopes, and his expectations for the future.

For you to become unforgettable in your networking conversations, I encourage you to begin lightly adding in stories of your flavorful past. You’ll notice that listeners will begin to open up to you about their stories. You’ll find yourself developing deeper relationships at a much faster rate. In turn, those relationships will develop into prospects, clients, referral sources, and friends.

Although you may first find yourself to be apprehensive, nervous, or even uncomfortable, just remember that your goal is to feel closer to one another. Overcome your feelings of confession and discomfort to break down barriers. Transform those feelings into a sense of deeper connection.

For those who feel as though the stories of their bitter, salty, or spicy pasts may be too much for others to hear, I want you to think about the ingredients of the aforementioned savory drink. Alone, we probably wouldn’t dare attempt to drink those ingredients on their own. We may find ourselves repulsed at the thought. But together, mixed in the right amounts and served in moderation, they become truly unforgettable. Just like you.

💡 In the comments, tell us some strategies that you’ve either used or experienced for making yourself memorable in your networking conversations. We’d love to hear from you!