Leverage the Power of Social Proof

by Tim Nichols | How to Apply 3MP Strategies

In his book, Influence: The Psychology of Persuasion, Dr. Robert B. Cialdini shares that social proof is a means we use to determine what is correct by discovering what other people think is correct. This idea specifically points to how we determine what constitutes correct behavior. As we see this concept applied across large populations, social proof creates direct results in our beliefs and opinions about politics, religion, entertainment, sports, culture, our communities, our families, and even how we feel about ourselves. As Dr. Cialdini puts it, the greater the number of people who believe an idea is correct, the more the idea will appear to be correct.

Lighted signs and cue cards on live television studio sets that read “applause” are not the first we see of the social proof phenomenon affecting large crowds. The idea was actually launched as early as 1820 in the opera houses of France. An organization known as the L’Assurance des Succés Dramatiques would lease themselves to opera houses to applaud, shout, laugh, or cry on demand, creating standing ovations and long encores. These claques were so effective in generating genuine audience reactions that they could transform the audience’s perception of the performance from passif to inspiré in a matter of moments. Each claque usually consisted of a leader, called the chef de claque, and several individuals known as claqueurs. 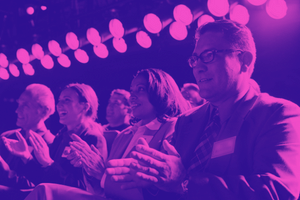 As the entertainment industry matured over time, so did the idea of inspiring audiences to generate genuine reactions. Social proof found its way into radio and television through both live studio audiences and recorded audio tracks of people clapping, laughing, shouting, or crying. The most popular of these is the laughter that you might hear on the television studio sets of comedies with live studio audiences. Whereas, the  pre-recorded laughter is known as a “laugh track.” Just listen to television shows like Happy Days, The Brady Bunch, Seinfeld, or Friends and you’ll hear the laughter in the background. Although the studio executives found the practice of using pre-recorded laughter initially repulsive, the results of the effect on their audiences, and their ratings, were simply undeniable. When the audience could be heard laughing during the “funny” parts of the show, the ratings achieved greater rewards and higher revenue.

Let’s consider how this idea of social proof has come to play a role in our daily lives. We all have a cultural baseline by which we measure our values. We developed much of our value system by mimicking what we observed in the homes in which we were raised. As we age, we begin to expand the radius by which we gather and process new information. Then, we take that new information and process how we should respond by how it compares to the filter of social proof. If the new information looks right, feels right, and is generally accepted as right by those with whom we are connected, we accept it as our own. That’s why the neighborhoods in which we grow up, the schools we attend, the churches we attend, and our closest relationships have such a strong influence on our beliefs about who we are and what we’re capable of accomplishing in our lives. Like it or not, we rely on social proof to navigate our lives.

Social Proof As A Tool

As we pop open the toolbox of tactical influence, I want you to understand that social proof is a tool that we all use to make better decisions for ourselves, our families, our businesses, and our communities. Like a hammer, it can be used for construction or for demolition. Our focus today is to give you insight as to how to leverage social proof as a valuable tool for building strong market influence for you, while simultaneously adding value to your clients, your peers, and your followers on social media.

When it comes to making decisions as to how to leverage such tools, I recommend that you follow the late Zig Ziglar’s advice when he said, “You can have everything you want in life if you will help enough other people get what they want.”

I believe that by edifying the thoughts, ideas, and accomplishments of others, we will create for ourselves relationships with those who want to know us, genuinely like us, and will trust us with their best interests. To do that, we’re going to help those whom we know, like, and trust to build their brand authority by engaging with their posts through the comment thread.

“There are high spots in all of our lives and most of them have come about through encouragement from someone else. I don’t care how great, how famous or successful a man or woman may be, each hungers for applause.”

You must become a claqueur for your clients, peers, and potential referral sources on the social media platforms in which you’re already engaged. If you’re already an active user, you most likely have an audience of active followers who see your posts and activity in their news feed. The idea is to create social proof that the person you are edifying is worthy of your trust, and thus should be trusted by all. Here are some things that you can do to help them to build their brand authority and introduce them to your followers.

✅  Watch for posts that your connections may have made regarding articles they’ve written, podcasts on which they’ve appeared, upcoming events in which they’ll be speaking, or upcoming/past events that they have publicized. Then do your best to boost the algorithm of the post by way of your engagement (like, comment, share) with the post.

✅  As other commenters chime in, make comments on the comments that they have made about the post. This edifies the commentator, creates an opportunity for an introduction to the commentator, and boosts the algorithm of the post in general. Then go and connect with or follow that commentator through their profile.

✅  Comment in such a way as to create conversations. Ask questions that will encourage others to join in the discussion.

✅  Mirror the emotions of the author in your comment response. By engaging in the emotional state of the author, you’ll convey true sincerity and strengthen the trust in your relationship. To those who are simply reading the post, but not responding, your response is subconsciously noted as an indicator of your authenticity and trustworthy nature. (Psychologically, this may register as a shared experience between you and the author, which will deepen your relationship further.) GIFs or Emojis are an excellent way to express your mirrored sense of emotion through the comment thread as well.

✅  If you know of someone that may immediately be able to add value to the discussion to the post through the comments, be sure to tag them as well. Bringing them into the conversation will work to increase the original post’s visibility by positioning the original post in the news feed of the audience of the person tagged. Furthermore, it potentially introduces the person you’ve tagged to a completely new community of relationship opportunities. (Psychologically, this action further deepens your relationships with both individuals whom you are edifying through your single comment.)

✅  If you have the ability to respond through a personalized video-recorded message (like what Dubb Video offers through LinkedIn) or a personalized emoji, do it. Social proof and credibility will be multiplied by the listener’s ability to see your face and hear your voice.

Social proof is the social evidence that we use to make better decisions when we don’t have the time, energy, or resources to research the idea for ourselves. Without giving it much thought, we look around and determine that if all of these other people agree that the idea being presented is a solid, credible, trustworthy idea, then it must be the best choice for us. That’s just how it works.

To leverage it as a tool to create strategic relationships and to become known as a thought leader in your market, you must become the most passionate cheerleader for your peers, your clients, and your market. Whether it be on social media or in person, you must sincerely edify them. Give them public praise for writing a great post or achieving their accomplishments. Shout their name. Applaud loudly. You’ll gain greater relationships and brand authority by helping others do the same.

Start now! If you have someone that you’d like to applaud, share who they are and what they have accomplished in the comments! We’ll help you cheer them on.